It seems like it was yesterday, but it’s actually been two months since we launched Book of Demons on Steam Early Access. Although most of our team at Thing Trunk has vast experience in game dev, this was the first Early Access launch for all of us. So how did it go and did we learn anything? Read on to learn all the pretty and all the ugly details.

For those who have never heard of Book of Demons, it’s a dark fantasy hack and slash game set in a pop-up book world of Paperverse. It’s a game that draws both from the old and the new. On one hand, it’s a sentimental journey to the roots of the PC gaming from the ‘90s (you could call it a tribute to Diablo 1), and on the other, it’s our attempt to breathe new life into the H&S genre. The game features multiple twists and changes to the usual action RPG mechanics, such as the card system that unifies spells, skills, and items, or the significantly changed movement and fighting rules. 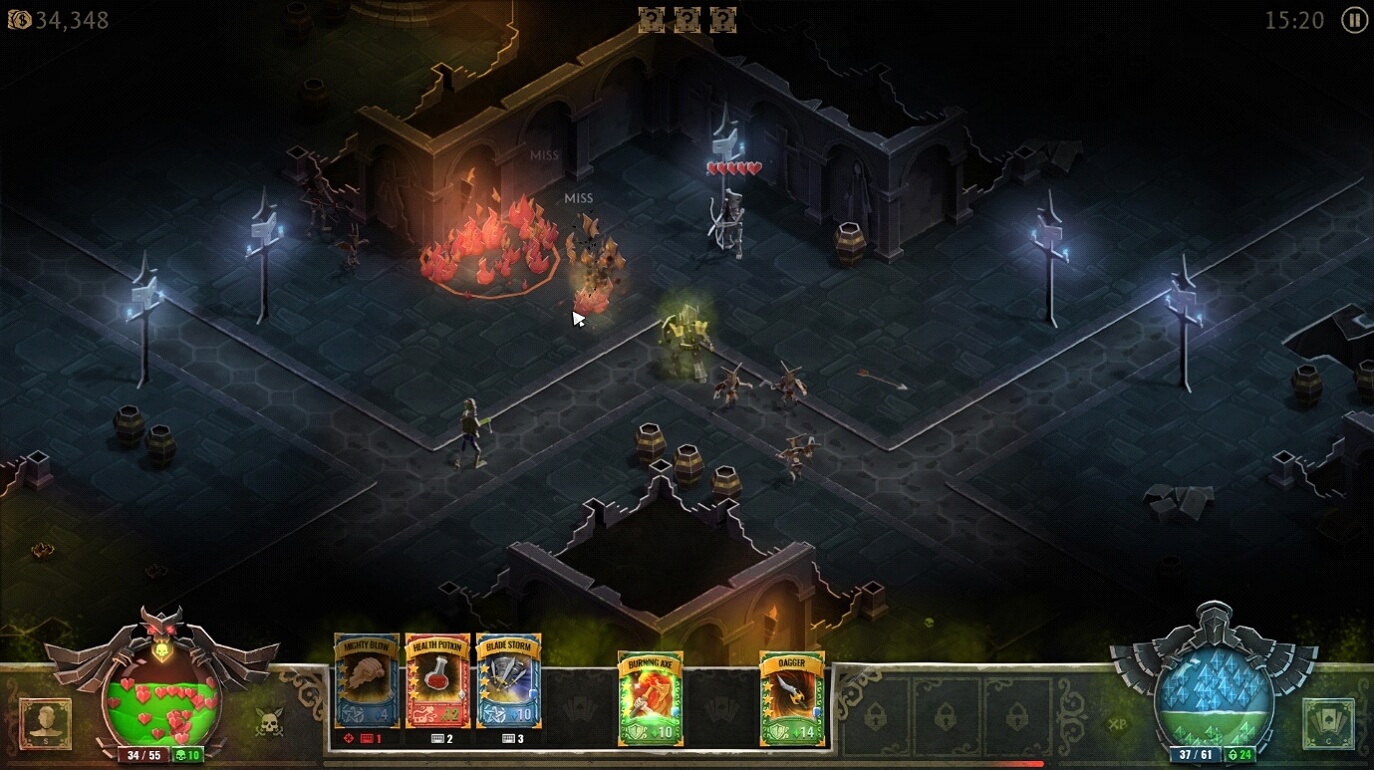 Since this was our first Early Access we didn’t really know what to expect. There was a lot of anxiety among the team, as the game has been in production for over 3 years now.

Since we don’t have a publisher, all of the marketing and financial risk is resting entirely on the personal investments we have made. As you can probably imagine, this can be quite stressful.

To recoup the costs, we need to sell about 35 thousand copies of the game, but of course, we are hoping for more as we want to fund the ongoing development (Book of Demons is just the first installment in the Return 2 Games series). In theory, selling this much should be pretty easy. After all, hack & slash is a very popular genre, and games such as Grim Dawn, Torchlight, Path of Exile, Van Helsing are able to move hundreds of thousands or even millions of copies. With a little bit of luck, and a quality game appealing to the same audience, we should also be able to reach at least some level of similar success, right?

But the reality was just about to prove that nothing will be easy.

Realizing that times when good games didn’t need marketing were long gone, we started promoting our game almost exactly 9 months before the Early Access launch. Many of you will immediately think that it was too late, and you probably are right, but the reality is that in such a small team like ours (currently 7 people on site), doing marketing always takes a toll on the game itself. Even now, I’m writing this blogpost, while I feel I should be adding stuff to the game.

During those 9 months, we did everything, more or less, by the book.

From the top of my head: we did several trailers and teasers, issued regular press releases about major announcements, did some interviews, launched a rich website for the series and a development blog. We set up a presskit, a newsletter and we engaged with our small community on the social media. We reposted content such as screens, wallpapers, development updates on Reddit, N4G, IndieDB, Gamasutra. We launched a Sneak-Peek program for people who wanted to test the game before it was done, and we even attended some shows which resulted in us receiving a few fancy awards.

This might sound like a lot – and it was, especially in terms of the effort we had to make – but the truth is that we didn’t make much of dent. We managed to get some press coverage, even from some high profile magazines such as Rock Paper Shotgun or GameInformer, but it never really felt like it translated into any significant long-term rise of awareness about our game (at least we didn’t record any sustaining boost to the visits on our websites).

Obviously, our marketing efforts were not enough to compete with the big AAA titles, but at least the basics were covered and we weren’t about to launch as a total surprise to everyone. Perhaps if we marketed around a stronger hook, we could have built more hype and momentum, but this is something we will never know.

Before I jump into the numbers, let me quickly summarize the marketing we did immediately before and during the launch. This was our biggest and most important event so far, so we worked hard to get everything right. We even added a full-time PR and marketing person (Tom) to the team to help with the workload (earlier we did marketing tasks during breaks from development and we outsourced some help mailing the gaming press during events – you can read about such an event here).

The goal was simple – get as much game coverage on the Internet during the early access launch as possible.

The last month before the release was especially intense as we were trying to get the press and YouTubers hyped and willing to cover the game on the day if the release. We sent hundreds of review codes (almost 400), and although we knew that not all of them would translate into coverage, we hoped that we’d manage to get at least some of the major outlets interested.

Gamespot did an exclusive first look video. The Escapist did a short editorial on our vision for the entire series and premiered our manifesto. We were featured on Rock, Paper, Shotgun and noticed by PC Gamer. We also received a lot of coverage from RPG and Indie sites (MMORPG.com, RPGFan Preview, RPGamer Impressions, IndieGames.com Early Access Pick, Gaming Trend Preview). We also got a couple of Let’s Plays made by popular YouTubers like Cryaotic (over 100k views!), quill18 or ZackScott.

Fans of classic PC gaming won’t want to miss this! It’s a Quick Play of Book of Demons! https://t.co/va8BggG1Aw

I won’t be detailing the “regular” marketing stuff, like posting news about the game on social media (we had a small budget of about 500 USD for paid ads), forums or Reddit. Let’s just say that we tried about every channel we could think of, but I’m sure we missed at least a few places. The Internet is a very big place after all. Anyway, we were again featured in many places which was good, but it was a drop in the bucket compared to the coverage obtained by the usual gaming AAA giants such as Blizzard, or even in comparison to the several indie titles the press is constantly going nuts about (No Man’s Sky anyone?).

We launched on 28th of July 2016 with 3 distribution channels in place: on Steam, in the Humble Store and doing direct sales from our website (powered by Humble Widget). Today we have two months’ worth of sales data. The graph below shows aggregate sales combining all the channels, but as you can imagine, Steam was the main driving force here.

As you can see we sold almost 7500 copies of the game in less than two months. 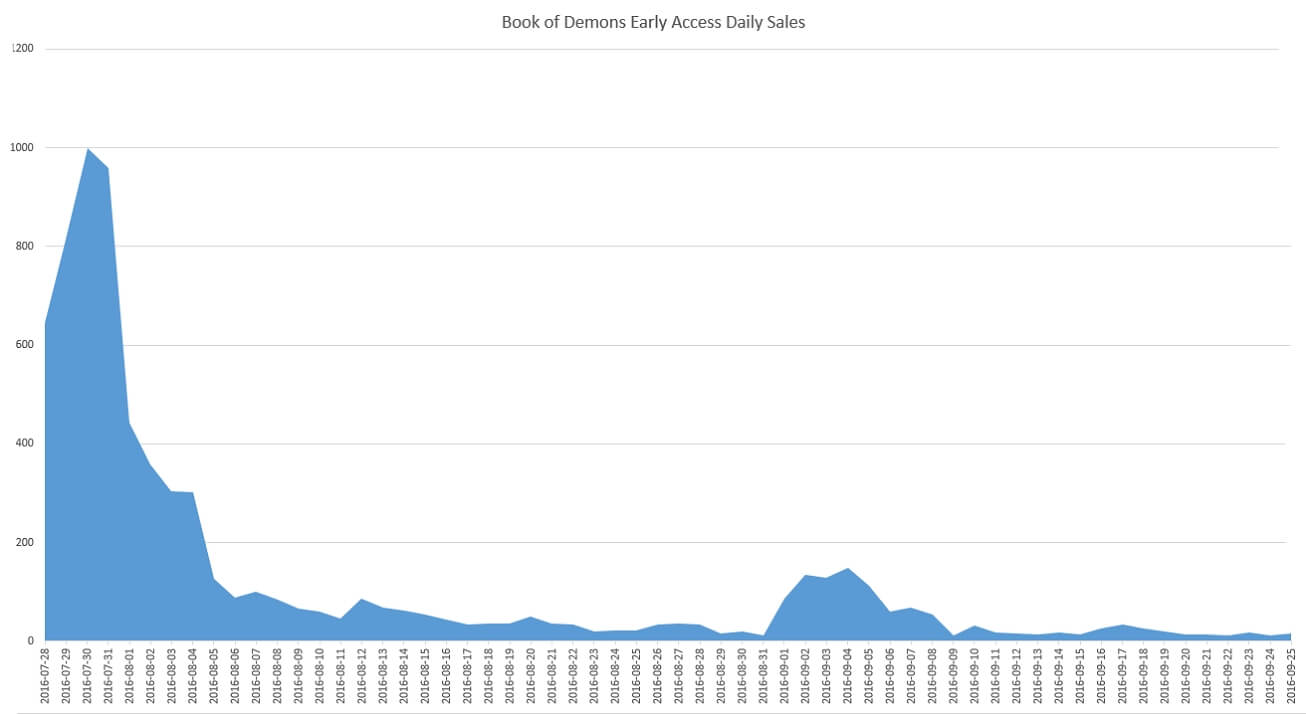 The graph should look familiar to anyone who published a game on a big but saturated distribution channel. When a game launches, there is a big boost as the game is getting a lot of attention. This is due to several factors:

But once the launch visibility ends, and the press moves on to other games, the sales quickly fall. From these numbers you can see, that we clearly didn’t manage to keep the momentum going. Our efforts to boost sales so far have been effective to some extent (the bump in sales in the second half of the chart is our Pax attendance together with another 25% sale on Steam) but their effects weren’t long lasting.

Certainly, selling the game at this pace will not result in us reaching our goals any time soon, but we are far from abandoning all hope and giving up 😉 From what I have learned from the excellent analytics articles by Sergey Galyonkin (editor of SteamSpy), our results are above the average of other games in early access. Also, games that launch after an early access period tend to do better than games that didn’t have an EA period.

We’re also not giving up on marketing efforts, as will be trying to build the sales volume with new events, centering around major game updates that are coming up. In the first major update we’ll be launching end-game features and a free demo (should land in October), in the second we’ll be adding a second character class (Mage) in November and then Rogue class in December. We’re also working on the Xbox version. 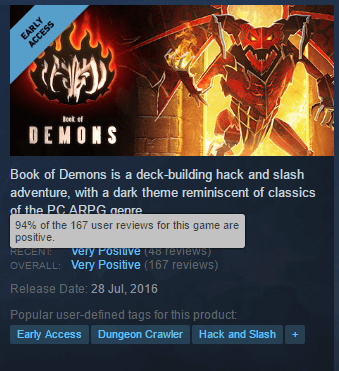 Another good news is that among players, we’re doing great.

Book of Demons is holding strong at about 94% positive reviews on Steam (even after the recent Steam changes) – and we’re doing everything we can to keep the satisfaction high. We have a lot of gamers who used to play other hack and slash games and most of them enjoy playing Book of Demons a lot. We even already have some die-hard fans! So it should just be a matter of reaching the right audience. Hopefully, we’ll be able to do it once the game is complete and out early next year.

Are we doing it wrong?

Creating a good game and working your ass off to build-up sales slowly over time is one way to go about things, but recently we’ve started wondering if we’re doing the right thing. Think about No Man’s Sky. They sold millions of copies even though the game was universally criticized by both gamers and the press once it was out. So, if it’s financially better to overpromise and under-deliver, one has to wonder where our industry is heading. The saddest part for me personally is that the press didn’t stop covering No Man’s Sky even when the word was out and everybody knew that it was not what was promised.

The conclusion should probably be, that unless your game goes viral, or you’re not willing to base your marketing efforts on deceiving press and players, you should be preparing for a long run and a lot of hard work optimizing and building sales over time. This is what we are looking at right now and we hope our efforts will eventually pay off. The sales we got so far aren’t exactly great, but they’re covering our current expenses and thanks to our participation in Early Access our budget will be less strained while we’re completing the game. Not to mention all of the possibilities to polish the game and make more customers happy.

But still, we at Thing Trunk wouldn’t want to trade places with No Man’s Sky, as such tactic is very short-sighted. And we’re here for the long game 🙂

PS. If you think Book of Demons and the whole Return 2 Games series are awesome, please consider helping us and spread the word!