Book of Demons will launch on Steam Early Access on the 28th of July!

After nearly 3 years of development Book of Demons finally has a Steam Early Access release date! It will launch on the 28th of July and we’re incredibly hyped about it, because it will probably be the most important day in the history of our studio yet.

You can add Book of Demons to your Steam wishlist so you will be notified when it launches, or you can take advantage of our pre-Early Access discount and buy it directly on our website. If you’re still not sure about buying the game in Early Access, read our blog post below about what features will be available during the beta-testing period and why we have decided to release the game in Early Access in the first place.

In the recent weeks, we have showcased Book of Demons a lot – we visited Digital Dragons and participated in the Indie Showcase competition (where we won an award!), we organized playtest sessions in our office, and finally, we presented the game as the Pixel Awards finalist at Pixel Heaven. During these events we received tons of positive feedback, we heard many suggestions on how to improve the game, and we gained knowledge on what aspects of the game we need to focus on. However, our main conclusion was that the game is already polished enough to share it with the public and that we definitely need to test it on a broader audience. A larger audience will hopefully help us adjust something that’s super important to us and all the aRPG genre fans – the game balance. 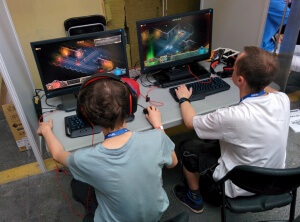 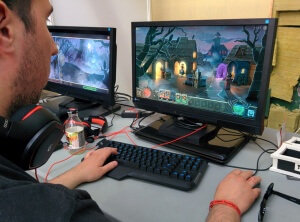 What is game balance, anyway?

Games in general, especially RPGs, are about making choices and deciding what’s the most viable strategy at the time being. When a game is unbalanced some of the strategies can be too powerful, thus allowing players to tackle all gameplay challenges in exactly the same way, over and over. This obviously makes some actions and game features ineffective or even useless, and that’s definitely something every game developer wants to avoid. Imagine a fighting game where mashing the “B” button and constantly kicking the opponent will almost always grant you victory. Not much of a fighting game, huh?

Ok, but why do you need to test it on a larger audience?

The above example is obviously a bit blunt and something like this would definitely have been caught by internal testers, but there are many things that are hard or even impossible to notice during in-house tests. Especially when you’re making a game like Book of Demons – a hack and slash of a size of Diablo 1, with semi-randomized bosses, procedurally generated dungeons, tons of enemies and dozens of cards with completely different gameplay mechanics. It’s not that we’re lazy or unwilling to see bugs or our game’s imperfections. It’s just that we have spent the last few years developing it and we’re subconsciously choosing strategies that we planned and designed ourselves. It’s really difficult to assume the role of a tester, when you’re making a game, and it’s always a better idea to let others be the testers. That’s why we decided to launch the game in Early Access.

What features will be available during Early Access and how long will it last?

The day one features of the Early Access version will include all the core mechanics, the whole single-player campaign, and the Freeplay mode, but will lack some of the content like additional character classes, skill cards or enemy types. We plan to add these features gradually during the Early Access period and release the final version of Book of Demons in Fall 2016.

What will be the price during the Early Access period?

Book of Demons is available on our website in three options:

To sum up – Book of Demons will launch on Steam Early Access on the 28th of July, the Early Access version will be fully functional but it won’t be the final form of Book of Demons. If you would like to help us improve the game, you can buy and play the Early Access version when it launches (add it to your wishlist, so you won’t forget it!) or get the game now, through our website, and benefit from our timed discount. Thanks for reading and see you next time!

Our last roadmap began with the words ‘2019 was a particularly chaotic time for all of us here.’ Oh boy, were we in for a big surprise, because we all know how 2020 turned out. But was it really all that bad? Let’s find out! In the roadmap... more

Explore the paper dungeons on consoles!

Are you waiting for the newest generation of consoles? We too! But we are not bidding farewell to PlayStation 4 and Xbox One yet. You’ll be happy to hear that now you can enter the paper dungeons on these platforms (aaand Nintendo Switch!) as... more

Preorder Book of Demons for iPad!

As you know from previous announcements we have been working on bringing Book of Demons to iPads. Time for an update on that: we are finishing the beta tests and getting very positive feedback from players. Bugs are ironed out, controls... more

Game developers don't share their early working concepts of games - the prototypes - often. When they do it's usually super interesting to see how the game changed and get a glimpse into the creation process. That's why we would like to... more