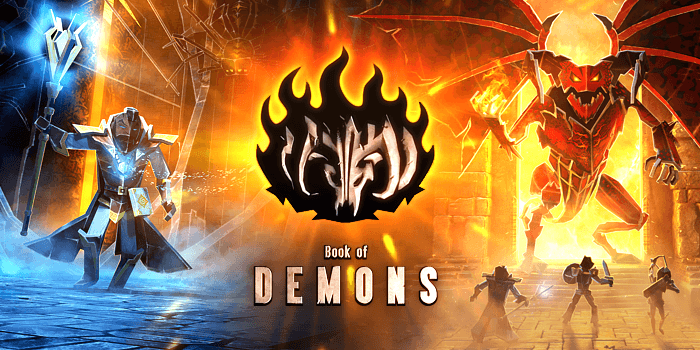 There comes a time in the life of most of the games when they have to spread wings and leave the nest. Yes, I’m talking about exiting Early Access and this time is now.

For this occasion we have prepared a launch trailer narrated by the Archdemon himself:

Book of Demons launched in Early Access two years ago. Since then we worked on improving and completing the game with unyielding support from many of you. You were amazing and together you created the best community we have seen on Steam.

It was an amazing adventure that doesn’t end here. We will need a few weeks to prepare the post-launch roadmap so meanwhile let me tell you about the stuff we are adding in today’s launch update.

This update brings 16 new cards, each with magical and legendary variants of course.

Ever stumbled upon a pack of monsters and thought “hey it would be neat to sneak up on them Thief style?”. You might like this one. Just make sure to not touch monsters while the potion is active.

Sometimes it’s good to take a step back and see the things for what they really are. Disenchant will convert all elemental monsters’ hearts to their regular counterparts for a limited time.

Crystal of Speed – All classes

Need an extra boost to catch up with a gargoyle or pump more damage per second? Picking up loot after combat takes too long? This card might be of use, bumping your movement and attack speed by up to 30%!

This one is not exactly new – this card used to be Warrior’s helmet but we changed it to a common card for all classes. Now everyone can get much-needed protection from stun effects! Your old Helmet Cards will change into this card automatically.

A new spell in Mage’s arsenal brings to the table the one element he was lacking: poison. And in a form of a lethal blast, no less. Each projectile seeks the nearest target so positioning and timing are crucial!

Teleport Others – The Mage

Ever got frustrated with spellcasters teleporting monsters on you? Pay them with the same coin and teleport everyone away! A new powerful crowd control tool in Mage’s arsenal.

Sometimes the best way to deal with the pain is to share it. Link monsters with this card and all damage with be propagated along the links.

Bring some randomness to your adventure. Tiara defends you in most unpredictable ways!

Rogues love traps and other lethal contraptions. Control the area around you by setting up electrical mines that will shock your opponents!

The less shocking but very useful trap that will freeze and burn anyone who steps into it. Except for Rogue, of course, she is not clumsy enough to trip her own traps. That would be unprofessional.

Launch a cloud of arrows that will make everything in a selected area look like a porcupine. Perfect for when you are feeling like fighting in a shade.

A magical gadget that summons a wind that blows away from the hero. Slows approaching monsters down and gives the Rogue time to punch a few holes in them.

Freeze and blow away everything in a chosen direction. Simple, effective, and very satisfying to use.

Relic of Rage – The Warrior

An arcane artifact that focuses rage against a certain type of monster. The more you hit the same type of monster in a row the more often special attack triggers.

Whoever said that the pen is mightier than the sword obviously didn’t have a good whetstone. Use before battle to boost damage output.

The ultimate path cleaner, an enchanted blade that deals extra damage to monsters standing on the path.

We have also prepared a special edition of the game, including the artbook and soundtrack. It’s already included in supporters bundle, of course, but can be bought separately to further support us if you are not up for Supporter’s Pack.

Adam has been working for some time on a digital artbook containing unpublished art, sketches, and prototypes for locations and monsters in Book of Demons. If you would like an insight into how the game visual style came to be what it is now this might be a treat.

If you are into music and would like to enjoy Book of Demons’ soundtrack Matt has prepared all our tracks in high quality (both flac and mp3).

Over the years we have created many game related wallpapers for our own use. We bundled them in Collector’s Content. 18 wallpapers in 2160p (16:9) and 2400p (16:10) resolutions. All wallpapers are without any logos or overlay text.

aThis is, of course, not the end of the road for the Book of Demons and the series but rather just a beginning. Right now we have to handle the launch but in a few weeks, we will be back with the post-launch roadmap for stuff we want to add to the game.

With new games being announced and new storefronts opening (seems like a new thing every day!) keeping ahead of the game is difficult (pun intended). But you are legion and if each one of you, our handsome players, will help we can shoot for the moon!

And if you want to ask us stuff consider checking out our “Ask Us Anything” thread we are doing on Reddit right now. There isn’t much to do during the launch but sit and stress out so that’s how we will keep ourselves distracted

As always,
Stay safe in the paper dungeons!
Konstanty and the whole Thing Trunk team