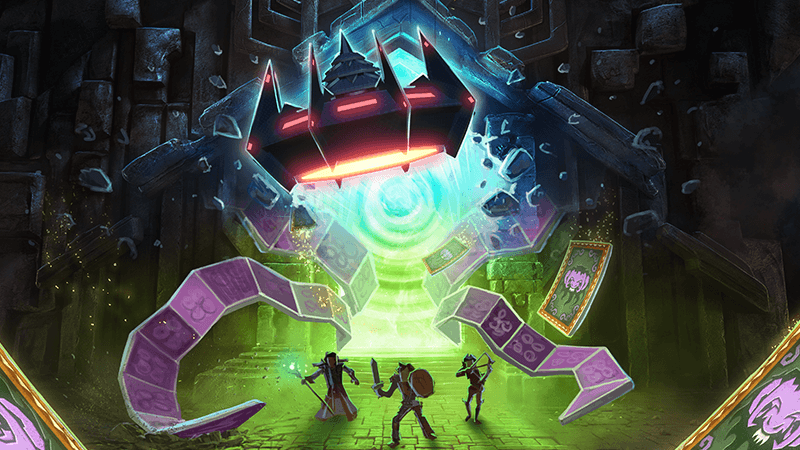 2019 was a particularly chaotic time for all of us here at Thing Trunk! A whole year has passed since Book of Demons went out of Early Access, so it’s high time we share with you what we’ve been up to for the last 12 months.

In the spirit of the annual roadmap update, I’ll try to briefly sum up what we managed to do, what’s coming up in the near and not so near future, and – as usual – why everything is always going slower than we’d like to. But most important of all, today we’re announcing not one, but two new games that we are working on in the Return 2 Games series!

Hellcard is a cooperative roguelike deckbuilder supporting both single and multiplayer modes. It takes place in the same universe as Book of Demons, but takes the story further and into unexpected places!

Book of Demons used cards for many of its mechanics and we have toyed with the idea of making a truly deckbuilding mode on top of it, but within the original game it could never be developed to its full potential.

Hellcard, on the other hand (pun intended), is a true turn-based card game and in this sense, it has more in common with games such as Slay the Spire than with action RPG’s.

What makes HELLCARD unique is that the battles take place in the dungeons and monster placement actually matters.

Another feature we’re extremely excited to share is that with Book of Demons: HELLCARD we’re planning to support co-op battles with up to three heroes facing Archdemon’s hordes. You’ll be able to descend into the dungeons solo, recruit computer-controlled companions, join your friends or strangers in their battles against the armies of darkness.

Hellcard internally started as an idea for a new game mode inside Book of Demons, but we soon realized that it’s a much bigger design and that it should be executed as a separate stand-alone spin-off game. While not a separate “book”, Hellcard will be a part of the Return 2 Games series and therefore will be included in R2G Supporter’s Pack. Book of Demons owners can expect *very* heavy discounts on launch.

If the above features get you excited, be sure to wishlist the game on Steam. Otherwise consider wishlisting anyway – who knows, maybe we will get you excited along the way!

As many of you speculated, Book of Aliens is the next big book in the Return 2 Games series and it’s a tribute to MicroProse’ UFO: Enemy Unknown. A game of global strategy and battlefield tactics.

Unfortunately, we can’t reveal much about the game mechanics at this point. The screens you see above and below are an indication where we want to be in terms of visuals, but they are just mockups based on one of the older prototypes. After testing lots of ideas, we had to scrap most of them because none of them fulfilled our R2G vision. Currently, we’re experimenting with several new gameplay mechanics that are much more original and promising.

In terms of story, Book of Aliens’ action takes place during a global crisis. Earth (or… PapEarth?) is threatened by an alien invasion originating from below the planet’s surface. Your mission is to lead a supranational agency of scientists and military agents in a desperate but valiant fight to understand the alien agenda and thwart it.

If you want to stay updated and be notified when the game is released, be sure to wishlist Book of Aliens on Steam.

We have an ambitious plan to launch Book of Demons: HELLCARD into early access before the end of next year. This should be doable given that Hellcard will be using much of the Book of Demons tech. We plan to showcase more details from the game, including gameplay clips, throughout the year and generally be as open with the development as possible.

Book of Aliens, on the other hand, does not have a release target yet, as we are still experimenting with new gameplay mechanics to find the perfect one. We don’t want to rush things and accelerate deadlines as this would mean compromising on quality.

Another reason why Book of Aliens might take more time to develop is that we decided to switch to a new game engine for this title. Book of Demons was created using a custom in-house C++ engine that was developed almost a decade ago. While it’s still on top of  current technology, keeping up with all the latest advancements in graphics tech is not realistic for such a small team as ours. We’d rather invest time into migrating to a new technology stack rather than keep reinventing the wheel.

Just like with Hellcard, we plan to give more regular updates on Book of Aliens and show how the game is progressing. And if you are excited about Hellcard and Book of Aliens and want to be the first one to test our future games be sure to join our Sneak-Peek Discord channel to follow their development. That’s where we will post about updates, public tests and ask your opinion. Just click button below ⤵️

Like I mentioned in the beginning, the whole year after the Book of Demons launch was insanely hectic and it wasn’t until recently that things started to settle a bit. Looking back at it I’m wondering how we even managed to squeeze in any new game development at all.

After we launched Book of Demons, the amount of work we had to do with the game didn’t drop, it actually increased! On one hand, we still had to keep developing the game to bring all the features that we promised in the post-release roadmap (last one of those should be coming in less than a month), and on the other, we had to start bringing the game to more shops and markets. In some countries, we launched a physical version of the game in retail stores. Thanks to our efforts, Book of Demons was one of the few launch titles for Xbox Game Pass on PC.

Apart from this, we were (and still are) working on an iPad port of Book of Demons and this is coming along nicely and is almost complete. As you know from our previous announcements, we were working on an Xbox One version of the game. Luckily, in the middle of the year, we were approached by a publisher who offered to port the game and bring it to even more platforms. Expect an announcement about it soon.

A considerable amount of time was dedicated to a thorough review of our technology stack and planning of future features. This was when we came to the conclusion that Hellcard would be the last title made in our current technology and that we need to make the switch to a mainstream modern engine with Book of Aliens. Learning a new technology can be a big endeavor on its own, but it’s an investment that should allow us to make better games faster in the future.

We also dedicated a significant amount of time to expanding the team. But thanks to the new people on board (two graphic artists and a designer) we were able to kick off a simultaneous development of Hellcard and Book of Aliens. Our team is now 10 people and we are still looking for a community manager.

By far, the biggest amount of time in 2019 sunk into moving to our new office. We found a very nice place in a good location and capable of accommodating our bigger team. Sadly, it was a mess and needed full remodeling. We moved a little over a month ago and it’s still not complete, but at least everyone’s got a place to sit and work.

The good news is that new games are coming along nicely and we can finally focus on them, as the biggest hurdles are behind us. If you are excited about Hellcard and Book of Aliens, and want to follow their development, be sure to join our Sneek-Peek discord channel. If you want to be notified when the games are released, wishlist the games on Steam or simply subscribe to our newsletter.

Take care, and let us know in the comments if you have any questions 🙂

Preorder Book of Demons for iPad!

As you know from previous announcements we have been working on bringing Book of Demons to iPads. Time for an update on that: we are finishing the beta tests and getting very positive feedback from players. Bugs are ironed out, controls... more