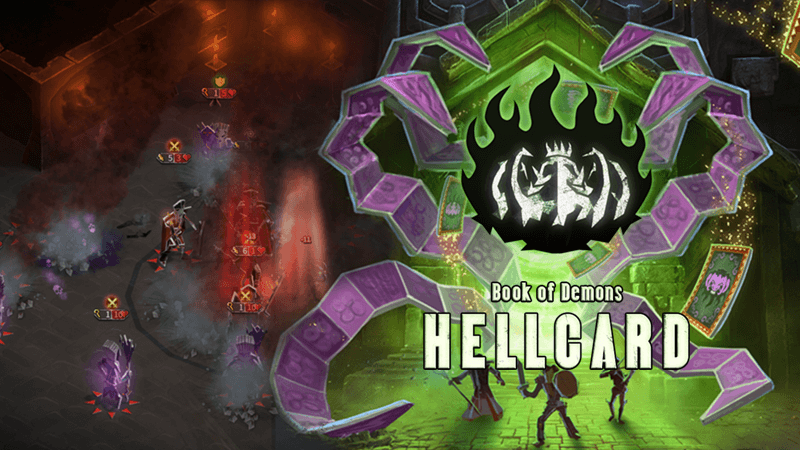 The Steam Games Festival was a blast, to say the least! We scrambled to get the demo up and running and tested for it but it was well worth it. We got a ton of valuable feedback from all of you. What’s more, we also tested the network backend. You are all amazing, thank you.

As you might already know from the past updates we are now scrapping the demo and writing the net code and the game from scratch. We will use all of that knowledge gathered to power-up the production of Hellcard. With more content, less Infernal Network Errors… aaaand without small cards sticking to a mouse cursor from time to time.

Curious how the playtests went? Here are some data we can share!

But most importantly, we got tons of feedback messages and surveys filled! We were flooded and floored by the amount of feedback we got. It was very positive too, which is a good sign since the demo had only a sliver of the final content of the game!

Oh, and to celebrate the 100th death of the Community Boss, we are working on a special wallpaper. Here is a sneak peek of the early speed paint concept:

So, what will the final game look like, then?

Some of you also mentioned it wasn’t clear for them what differs the demo from the full version of Hellcard. As we’ve mentioned before, the demo was supposed to test the core mechanics and multiplayer with the new code only.

In the demo, you got to pick one card or heal between fights. This was obviously a placeholder. In the final game, there will be story events between fights. I don’t want to spoil too much as I plan to focus on this in another post.

Last but not least – the singleplayer mode. Obviously, in the final game, there will be a single-player mode. It won’t be simply playing with bots either, but a more complex system of companions. Again, it’s something I will focus more in a separate post.

A huge THANK YOU

This is also the time to thank all the Supporters and Discord beta testers who answered the call and tested the game before it hit Steam Games Festival. Without you, this demo wouldn’t be anywhere near the quality it was.

Also, a separate BIG thank you goes to all our friends on Discord who helped us answer the questions during the AmA on Stream. The Discord community even wrote a standalone debug tool and save manager! You are amazing! <3 For anyone who would like to be a part of that fantastic community here is the link to our Discord.

If you tried the demo and liked what you saw, please consider spreading the word and wishlisting the game – it’s the only way Hellcard can reach new players as Steam shows wishlisted games to more people. This means a bigger player base and thus more people to play with! Not to mention you will get notified once it’s released

As always,
Stay safe in the paper dungeons!
Konstanty

Backend Most major backend systems are already implemented, which means we can move into the predictable realm of producing content. We will be tweaking stuff when it comes to the backbone but we don’t expect any major... more

Our last roadmap began with the words ‘2019 was a particularly chaotic time for all of us here.’ Oh boy, were we in for a big surprise, because we all know how 2020 turned out. But was it really all that bad? Let’s find out! In the roadmap... more